My PhD thesis Talo, kartano, puutarha. Kauppahuoneen omistaja
Marie Hackman ja hänen kulutusvalintansa varhaismoderinssa
Viipurissa focused on consumption choices of a merchant
widow named Marie Hackman (1776–1865). She was the
mistress of a country house called Herttuala, near Vyborg (sw.
Viborg). Herttuala’s garden was an important, if not the most
important, place of consumption for Marie. ‘Garden is my lover’,
she described it when ordering plants from Germany.
Archival sources of my study consist of letters and account books
provided by the archives of Hackman & Co, Hackman family
and Monrepos manor. The source material demonstrated the importance
of gardens for conspicuous consumption (‘showing off’)
and socializing. Lifestyle of the Vyborg elite emulated the lifestyle
of St. Petersburg, Baltic and northern German bourgeoisie or genteel
people.

Gender and gardens
One of my interests are gendered gardens. In Vyborg, most of the
manorial estates were situated quite close to the town. Hence, women
and children often spent the whole summer in the countryside
while men worked in town and sporadically visited the country
estates. This resembles suburban villa lifestyle, which was known in
London and Hamburg at the time, described by Jon Stobart (2016,
pp. 89–102) and Michael North (2008, pp. 77–92) in their studies.
Magazines or plants and seed catalogues were ordered from Germany
and information was exchanged while visiting friends or public
gardens in St. Petersburg. Hence, both men and women knew
about the latest garden fashion and took part in both designing of
the gardens and the actual gardening, at least by giving orders and
monitoring the paid workforce (Vainio-Korhonen 2011, p.).
The gardens of Vyborg were fashionably styled, ambitiously built
and cared-for places. The owners of the gardens, both men and women,
put a lot of effort into these gardens, which were places for socializing
and status manifestation. Michael North (2008, p. 94) has
described how the elite of the North-German cities enjoyed the informal
and sociable lifestyle of the country houses. Informality and
sociability were the key features of the Vyborg country houses, too.
Based on letters and diary entries, it seems that especially women
were enthusiastic users of the gardens. This has to be linked to
women’s responsibilities; they prepared food for their family and
other household members. Also women were important figures in
social life and the garden was one of the informal arenas where they
could act.
Hence, if we want to study gender, garden and garden history, we
should look beyond the architectural structures or building processes
and focus instead on the daily use of the garden space. 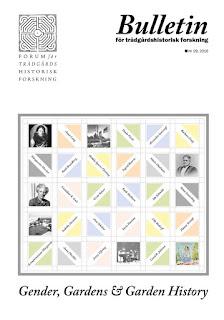